The BayernLabs are local education centers open to anyone interested in learning more about the topic of digitalization. 11 of these institutes are already in operation in Bavaria. This past Monday a new center was opened in Forchheim by Bavarian State Minister Albert Füracker. fortiss, a cooperation partner of BayernLabs, exclusively programmed a demonstrator for the new location which is designed to make the topic of software tangible in an entertaining fashion.

Learn to program in a fun way

The BayernLabs already serve as an important partner in the area of digitalization for numerous communities, local government offices, schools, associations and clubs, as well as for regional businesses.  The centers are an initiative of the Bavarian State Ministries for Finance and Regional Affairs. The Office for Digitalization, Broadband and Measurements, plus the local respective BayernLabs team, are responsible for the design and operation.

At the opening on Monday in Forchheim, Minister of State Füracker praised the great commitment of all those involved in the success of the BayernLabs initiative and was pleased that numerous representatives of the city, the authorities and, above all, the schools were present at the event. Digitization is also associated with an important educational mission at the same time, he said.

fortiss employee Peter Bludau developed a demonstrator exclusively for the Forchheim location, which is designed to provide a better understanding of software through an interactive game. The research associate, who works in the Center for Code Excellence (CCE) field of competence, discovered that software is an abstract topic for most people, despite the fact that it’s employed everywhere, 24 x 7. With this in mind, during the programming he also used an approach that he describes as“ penetrating the core expertise of software in an understandable and especially entertaining manner.”

The demonstrator consists of a touch-capable desktop monitor and a software prototype in the form of a multiple-user game-like application in which up to four players can simultaneously program a robot figure. The goal is to guide the figure step-by-step through a multi-level game world while circumventing various obstacles. The game relies on this simple approach to explain two basic programming concepts and also fulfills the BayernLabs’ intention to make digitalization tangible in a hands-on way.

A free IT lab available to anyone

Under the motto “Showcase for Digital Innovations”, 13 BayernLabs will be established, with at least one in each government district in Bavaria. The Bavarian government consciously followed a strategy of setting up the labs in more rural areas in order to spur targeted development in these regions.

At the BayernLabs, interested visitors or school classes can learn about the digital world, the latest trends and digital innovations by means of practical examples. Numerous applications are demonstrated in real-time, such as robots and virtual reality goggles. The IT labs are more than just showcases and offer opportunities for interaction, such as participation in workshops, acquiring theoretical knowledge through lectures and gaining practical experience. 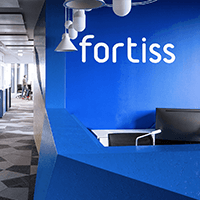