With the Neuromorphics Lab, fortiss offers a flexible experimental platform for testing AI applications with neuromorphic support, presenting a one-of-a-kind simulation environment in which a virtual robot body is controlled by a neuromorphic algorithm. Autonomous robot locomotion, given its complexity and the limited battery capacity, is one of the challenges of AI. Robot movements are calculated using a neuromorphic “Loihi” chip based on spiking (such as human brain pulses) neural networks (SNN), thus providing the user an immersive simulation. In the future, the Neuromorphics Lab will feature a fully-autonomous, Loihi-controlled robot arm and drone simulation as a flying robot with AI sensor technology.

A wide range of robotic and everyday systems will benefit from lower battery costs and weight and extended battery life through neuromorphic computing, thus bringing them to life. This development will enable a multitude of industrial applications in the area of the Internet of Things (IoT), mobile robots, autonomous vehicles and aerospace. Concrete examples include voice recognition in vehicles, movement detection in drones, gesture classification in household appliances, augmented reality in smartphones, liquids analysis in medical instruments and debris detection in mini-satellites. 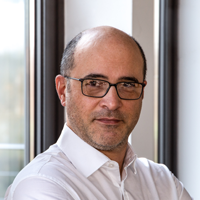